Sometimes in life, you have to take the time to slow down, be still and just REMEMBER.

This past week, made me do just that.

Reverend Billy Graham passed away on Wednesday, February 21 at the age of 99. Seeing the post about his passing from my husband on social media, brought to mind so much of my childhood. I was instantly in tears. Growing up Lutheran, this man was well known, and his evangelistic association was renowned. My maternal grandparents talked about, listened to and gave on a regular basis to his ministry. Upon visiting my grandparents in their home, for as long as I can remember, I can hear my grandfather wanting me to sit down with him in the living room and listen to Billy with him. My grandfather loved watching sermons on the television or hearing them on Christian radio.

My mother has shared over the years with our family about her own response to Jesus through the message of Billy Graham. She felt the Lord ask her to respond during a crusade she attended when she was a young girl. My grandfather at the time was in a rush to get out of the parking lot and back home, so she never went forward, but she bargained with God in the backseat, saying that she would one day accept Him. And when she was pregnant with me in 1979, she heard the Lord prodding her again about her decision. She dedicated her life to Him on the couch while I was in utero.

As a teenager, I remember when Graham came to Cleveland for a crusade. For months beforehand, my parents and other church members were praying and preparing for the vast work that is involved in putting on a crusade. I went to prayer services at many local churches with my mom, and learned to pray specifically for the crusade and those who would hear the message. We would pray for peoples’ hearts to be ready and their ears to be opened. We would spread the message about the crusade with flyers and conversations. We didn’t have social media invitations we could send to our 300+ friends at once. It was word of mouth and print media. 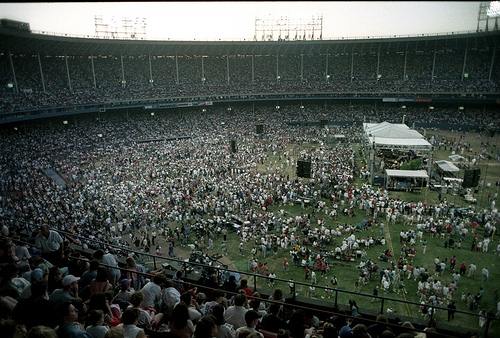 On June 11, 1994, I asked my best friend who was Catholic at the time, to come with me. After all, it was Youth Night, and she was beginning to go to youth group at my church. Eighty-five thousand people were there that night. We went with my parents, and heard dcTalk, Michael W Smith and finally a message from Billy Graham. When the time came to make a decision, Laura and I looked at each other, and said we would go forward. We didn’t hesitate (I had remembered my mom’s regret for waiting) and we walked down the concrete steps at Cleveland Municipal Stadium during “Just As I Am” to the grass below, to be met by a man and woman who would pray with us and get us phone numbers of people to follow up with later. I’ll never forget the joy of walking with Laura, feeling a bond between us that was deeper than our already amazing friendship. My friend had heard about Jesus and wanted to know more! And I felt ready to commit my life to Him. It was an incredible evening, and one that I had tucked away in my heart.

Something that stands out to me, is Graham’s humility. Since his passing, everyone is putting their two cents in about who he was. Many who didn’t like him or his message have been trying to paint him as a homophobic political activist. And even knowing that those who hate Jesus will say the same of us, I saw how Graham responded. In each article, you would read how he had apologized for his comments and admitted his humanity. If he offended someone or misspoke, he owned up to it. He didn’t pretend he didn’t say something. He apologized for hurting others, but also wasn’t afraid to say what Scripture says. In one of his crusade messages here in Cleveland, he stated, “I am a sinner who belongs in the gutter with the rest of the sinners”. Just because he was a preacher who reached millions, didn’t mean that he saw himself any higher than any of us, nor was he. I admit I don’t see that in many other people who claim to follow Christ. I admire the man who can admit wrong, ask the Lord for help and take personal responsibility.

He also was truthful when he would say, “The word of God is offensive, because it demands a response. It demands change.” Many in today’s world don’t want that in their lives, and Scripture also predicted the worlds’ response to such accusations. Those who are content in their sin will refuse the gospel and reject it. We become comfortable living the way we do without regard for the Creator who designed THE WAY that works. We follow the flesh and then justify it. But that just doesn’t work. It creates the society we live in now, where everyone wants to have what others work for, where others want everything they want without regard for how it affects others, and selfishness and lack of personal responsibility is prevalent. We see the decay of society, and then bash anyone who draws attention to it.

Graham never beat people over the head with his Bible. He was a Baptist preacher, yes, but his message was never a list of dos and don’ts, but the one message that meant the most: YOU NEED TO BE SAVED, otherwise you will be in Hell. He wasn’t afraid to tell anyone what was in the Bible, because he knew the message meant more than our choice to live against it. The Bible has the power to literally change lives of those we love and share the Earth with! The Bible holds the cure for our sin state. It also is a mirror for our souls, so we can see our desperate need for a Savior. Coincidentally, when Jesus left the Earth, He had commissioned his disciples to continue sharing the truth of the gospel, that eternal LIFE is in belief in Jesus, people must repent from their sin, and be baptized to show their commitment to the family of Christ. Graham shared that message of us being sinners and needing a Savior and he did it well, because so many responded during his crusades because of his truthful messages and his godly character.

I can only imagine what the reception was like in Heaven for a man who was so humble, never stating that he DIDN’T need Jesus, and to actually look into the face of God on the other side. I cried tears of hope and joy this week, because it reignited a joy in my heart for what is to come. Those of us who believe the truth about Jesus’ death and resurrection know that this life is not all there is, there is so much more. Eternity is a long time compared to the blink of an eye we have in these bodies here on Earth. Remembering the work of Billy Graham and his hope of the world turning to Christ made me remember the Lord confirming for me in my heart that I am His beloved daughter, and I am loved beyond measure.

And with the mourning of Billy Graham’s legacy and his impact on my family, I was able to go to see Steven Curtis Chapman in Cleveland on Thursday, February 22. During my teenage years, I listened to Christian radio and heard about this guy who wrote songs. I found them catchy, so I would go to a local store called Lemstone in Parmatown and listen to CDs before buying them. Steven Curtis Chapman’s music would resonate with me while I was trying hard to follow Jesus. I bought “Speechless” in 1999. And hearing “Dive” made me realize that I could hang on the fence and do the church thing while still doing the “world” thing. Or I could DIVE into my relationship with Jesus and try to make a difference for Him, instead of trying to keep my feet in both worlds. Those lyrics are still tucked away in my brain! That song had such impact on my decision for Jesus.

I bought my first car in 1999, plugged my Walkman into my cassette deck using an adapter in the car and would blast his music while driving. I even bought a specialized license plate: SPCHLES! I was all in, and loved the deep meaning lyrics that he wrote. Some of my other favorites were “His Strength is Perfect”, “I will be here”, “No Better Place”, “For the Sake of the Call”, “The Great Adventure”, “Lord of the Dance”, “Not Home Yet”, “I Am Found in You”, “Live Out Loud”, “Magnificent Obsession”, and “Much of You”. And listening to SCC sing those songs during his concert, it made me reflect on the impact those words had on my life as a young believer.

If you’ve read my blog before, you know some of my story, my heartache of a divorce and finding a reason for living in my later twenties. But through all of my years of life here, I have known that the Lord has something for me. He gave my name to my mother while she was still pregnant with me, not even aware of what sex I would be. I know He has a purpose for my life, but I also now know that my life is meant to glorify Him, not myself.

Two men that God has used to sow seeds of truth into my heart are Billy Graham and Steven Curtis Chapman. I love listening to biblical sermons and I also love songs that stick with me, that I can sing anytime and that give me hope.

I bring up the topic of remembrance, because Steven Curtis Chapman sang a song for us called “Remember to Remember”. He spoke about remembering moments of impact in our lives so that we could mark God’s faithfulness. Building altars was a practice typically done in the Old Testament, where people would take rocks and stack them up, to symbolize an altar of thankfulness, for themselves, for their children and for others to witness.

And I felt like last week God gave me the time to do just that. And to be honest, I think it’s going to become a practice of mine. I think it’s important to step outside of ourselves, and reflect on the people God has used to be a part of our lives, and who have helped us become who we are. I’ve got a list of family members, teachers from my Lutheran schools growing up, musicians, authors, magazine article writers, friends, Christian sisters, etc. And every now and then, I think it’s a great idea to sit back and think about their influence in my life. From someone as well-known as Billy Graham, down to a neighbor who texts for prayer requests…

Reflect on how they pointed me to Jesus.

Who are the most influential people in your life?

Yup, these two are delaying me from getting to the gym... 🤷 #powernapbeforeigo #pupsnoozebutton 🐾🤪
🤣🐾
❤️ #snugglebug #daddysgirl 🐾